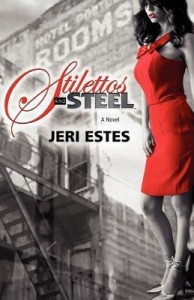 Jeri Estes has made it no secret that Jesse, the protagonist, in her novel, Stilettos and Steel, is closely modeled after her own life. So let’s hope that all of Estes’ former Catholic school teachers are dead or demented, lest they run across her book. Not that a Catholic school girl turned lesbian runaway is a shock anymore, even to a nun, but a lesbian runaway turned butch whore gangster professional pimp would surely make Sister Marie Ella Phant blanch and lock herself in the confessional booth to self-flagellate for not having been a better influence in the classroom.

It all begins when Jesse, discovers she’s gay and, fearing a parentally mandated lifetime of “asylums, shock treatments and lobotomies” the 16-year-old flees her comfortable middle class home and ends up hooking in the Tenderloin, San Francisco’s sex mecca. By 19, Jesse is broke, shooting smack, and inches away from death when Bunny, an experienced high-ticket whore, takes a shine to her. (Wouldn’t you?) In no time, Bunny cleans up Jessie’s drug habit, prinks her up in shiny new duds, and turns her into the dildo-packing butch heartthrob of every lesbian hooker in the district.

Armed with a mental catechism of best business practices, gleaned from watching her father manage a stable of door to door Electrolux salesmen, Jesse uses her charm, swagger, sexual energy and good looks to draw a loyal stable of cheap, mid-priced, and high end whores. Offering fare for any budget, Jesse soon becomes the “head-pimp-what’s-in-charge of the Tenderloin.

Abashedly, I have to admit that I was momentarily swept away on a sea of political incorrectness and tempted to cheer for the twisted girl-pimp’s rise out of poverty (Who’s your daddy?). But Jesse lives the high life just long enough to piss off her competition. When a big brutish thug with the mentality of a small soap dish–. Why am I telling you this? Read it yourself! Suffice it to say that the outcome brought me to my senses and left me righteously redeemed.

Do I bristle at Este’s glamorization of her character’s dirty deeds? As a fairly political lesbian, and totally honest person, I have to say that I do. Taking power away from male pimps in order to form a female-owned stable of whores doesn’t win any prizes for breaking through the glass ceiling, in my book.

“…the air stole through my silk shirt…the neighborhood lost its civility……gossip flowed like sewage.”

I review books for well developed characters like the amoral Jesse, who still believes that a Catholic god has her back, and the beautiful Carmen, whose fierce devotion to her butch and dreams of a house in the suburbs would make Jerry Springer proud. I review books for peripheral but colorful characters like Johnny Fuck-Fuck, Little Bastard, Tattoo Jean, Two Bits and Helmet Head.

I review books for smart humor, like the hilarious scenes in which it dawns on Jesse that Bunny’s girlfriend, a “six-foot dyke with 350 pounds of undiciplined flesh” might view Bunny’s interest in her as a problem.

Lastly, I look for a good story with interesting events. You can’t get much more interesting than this band of misfits with it’s own distorted code of honor, in an explosive setting where anyone might turn up as a corpse.

If you’re the type who spells women ‘womyn’, protests the attendence of male children at the Michigan music fest, and thinks Venus De Milo is pornography, fine. Don’t read this book. But anyone who enjoys a well-written book with story elements that create a highly engaging read, I urge you to run right out and get yourself a copy. Did I mention the hot sex? Oh but you probably don’t want to know about that.

Kudos to Estes for her riveting tale, and especially to her editor and copy editor who did a hell of a job putting it together.

This site uses Akismet to reduce spam. Learn how your comment data is processed.

Choose your preferred format from the menu below, then click on the book.
Available now! Only $4.99
See Amazon reviews
See 48fourteen reviews
Win a FREE copy!