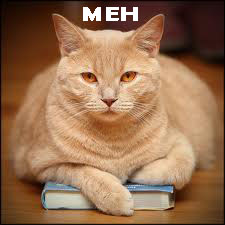 When looking for a book on Amazon I use the reviews to help me make a decision. I sample the lowest ratings first, throw out the ones that contain some variation of “I hated this book, the ending was too sad, I would never be friends with that character, and focus on the reviews that contain literate, constructive criticism rather than a subjective emotional response.

Today I ran across a great example of a well-written, bad review, and the amazing response from the author. I was so impressed by the author’s gracious response that, as a courtesy, I contacted her and let her know that I intended to use the interchange generically on my blog without identifying her or her book.

It was pretty shocking when she threw a shit fit, threatened to report me and my blog to Amazon, and tell me in no uncertain terms that she never wants to hear from me again. I guess when one bottles up all her rage at disappointed readers, one takes out her frustration on others.

Since her reaction was so over the top, I’ll just paraphrase the review and response.

Review: The reviewer thought that the author was a great storyteller with a worthwhile message and a strong voice, but advised her to get an editor for the terrible grammar, punctuation and syntax that populated every paragraph.  He went on to suggest that she make use of beta readers who would give her valid feedback instead of being satisfied with the five-star reviews she got from friends.

Author Response:  The author thanked the reviewer for the time he spent reading the book, informed him that the book had undergone a complete rewrite since he had purchased it, and  expressed her gratitude for his authentic and constructive feedback.

So, esteemed readers, the moral of this story was supposed to be that authors do read your reviews and appreciate helpful feedback, so don’t be afraid to write an authentic review, but keep it balanced. Mention the things you liked about the book and make sure that your criticism is constructive.

But I guess the real moral of the story is that authors who read bad reviews about their books, know better than to go psycho on the reviewer for fear that their public response will go viral and people won’t buy their books. But apparently anything goes in private.

Posted in How To.

Choose your preferred format from the menu below, then click on the book.
Available now! Only $4.99
See Amazon reviews
See 48fourteen reviews
Win a FREE copy!